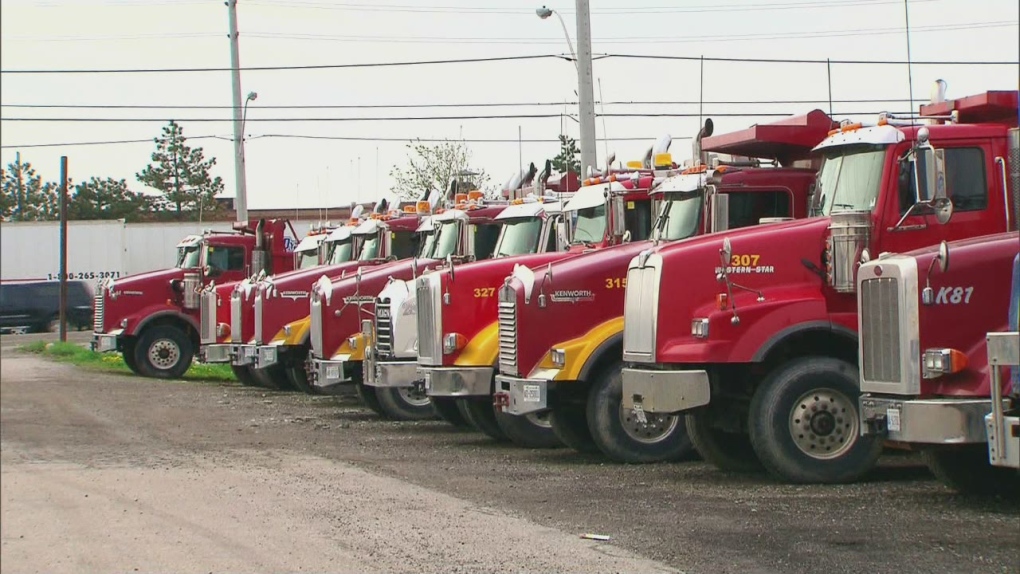 MONTREAL -- After 40 years as a truck driver, Jack Fielding says it's easier to name the places in North America where he hasn't been than the ones he has.

And after driving five million kilometres, the 57 year-old still enjoys the freedom of the road.

"For the most part, there's nobody looking over my shoulder telling me what to do," says Fielding, who hails from McKellar, Ont. "I have an assignment and I'm left to do it at my own pace and how I think it should be done."

But as Fielding and thousands like him near retirement age, the industry is struggling to recruit young people who share his enthusiasm for the job.

This means the industry is facing a looming labour shortage that could reach 48,000 drivers by 2024, according to the Canadian Trucking Alliance.

The average age of a truck driver is over 47 --  up from 45 in 2013 -- and almost 30 per cent of the driving force is 55 or over, which makes it one of the oldest workforces in Canada, according to the organization's president.

"Tens of thousands of them are nearing retirement and we're not getting anywhere near our commensurate share of new drivers into the business," says David Bradley.

There are multiple reasons for the looming shortage, but many believe the lifestyle simply isn't attractive to a younger generation.

Fielding, for example, usually works 10-14 days straight, with three days off between trips. Schedules are not set in advance, and drivers often work 12 hours or more a day.

"You're not home with your friends on Friday nights having parties," he says. "If you have a family you might miss out on birthdays and things like that."

Bradley says this makes it harder to attract younger people or those with families, who tend to place a higher emphasis on work-life balance than older generations.

It may also explain why the industry struggles to recruit women, who make up only about four to six per cent of the driving population.

Nadine Gauthier, who spent six years driving shipping containers in and around the Montreal area, is trying to change that.

The 43-year old, now a supervisor for Simard Transport, also works on behalf of Quebec's trucking association to convince girls and women that trucking isn't just a "man's world."

She says that while the first women "pioneers" may have been given a hard time, the industry has become very welcoming to women.

"I sincerely think men like having women in their teams and at the heart of the company," she notes. "It brings a new dynamic, and men are very respectful of that."

However, they're often paid by the mile, which means their income can fluctuate based on unexpected delays or traffic. They also tend to work longer hours than the rest of the population.

It's also difficult to hire immigrants, except under the Temporary Foreign Worker program, since truck driving is not considered a skilled occupation and drivers therefore aren't eligible for most federal economic immigration programs.

Bradley says the current economic downturn in Canada -- particularly in the oil industry --  has alleviated the shortage for the moment.

But he believes long-term solutions are needed to ensure people who enter the profession stay there, instead of viewing it as a stop-gap between jobs.

The industry is working to change the classification of truck driving to semi-skilled or skilled, which Bradley says is key to getting more resources for training and attracting career-oriented candidates.

Provinces are also working on implementing their own regulations and mandatory training standards.

In its own bid to address the shortage, the Quebec government has introduced a training program for 17-and-18 year old wannabe truckers.

Students are partnered with companies that agree to give them internships at the end of the four-month course, which often lead to permanent jobs.

One recent graduate, 20-year-old Anthony Boisvert, was hired straight out of school and already has two years under his belt as a long-distance trucker for Groupe Robert.

He loves the job, including the 60-80 hour workweeks and stretches of four to five days away from home, but realizes it isn't for everyone.

Bradley says that although individual companies are looking at scheduling, wages and recruitment strategies to tackle the shortage, change is slow to come.

"This is a fragmented, competitive industry, and it's hard to turn it on a dime," he says.

Fielding, who estimates he has five years of driving left, can't quite figure out why more young people don't seem to want to take over behind the wheel.

"Where (else) can you get paid to see North America, to experience things in life?" he says. "I think it would be a great job for somebody just starting out."