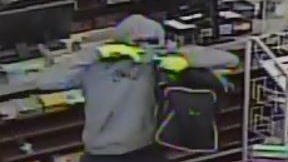 Caledon OPP are searching for three suspects after the second armed in one week.

Police say two men entered a business in the Town of Caledon, located at 18 King Street East, around 5:30 p.m. on Sept. 23. One of the two held the store at gunpoint and demanded to be taken to the location where narcotics were kept.

A third man waited outside in the driver seat of what police believe was an older black model sedan. All three fled the scene with cash and drugs.

Then on Sept. 30, police were called around 10:45 a.m. after a robbery at another business. Police believe the suspects were the same as the first robbery and said they left with cash and medicinal drugs.

Suspects 1 and 2 are described as black, with thin builds and between 18 to 25 years old.

Suspect 1 is approximately 5'3" and was wearing a grey hoodie, dark blue pants, white shotes, a surgical mask, and yellow construction gloves. This suspect carried a black duffle bag and a black pistol

Suspect 2 is 5'5" and was wearing a black hoodie with grey or camo pants, black shoes with red accents, a surgical mask and yellow construction gloves.

Suspect 3 is also described as a black male with a thin build, wearing a surgical mask and black or grey hoodie.

The vehicle is believed to be an older black model Honda, possibly an Accord.

Canadian military would be 'challenged' to launch a large scale operation: chief of the defence staff

Canada’s military forces are 'ready' to meet their commitments should Russia's war in Ukraine spread to NATO countries, but it would be a 'challenge' to launch a larger scale operation in the long term, with ongoing personnel and equipment shortages, according to Chief of the Defence Staff Gen. Wayne Eyre.

Protests against China's restrictive COVID-19 measures appeared to roil in a number of cities Saturday night, in displays of public defiance fanned by anger over a deadly fire in the western Xinjiang region.

A 12-year-old boy is dead after playing Russian Roulette with peers in Jackson, Miss., police say.

Alcohol and speed were factors in a tragic collision that killed three junior hockey players in B.C.'s Lower Mainland last year, according to a coroner's report.

In less than 24 hours, Canada returns to the men’s FIFA World Cup for its next group stage match against Croatia. CTVNews.ca takes a look at what you need to know ahead of the game on Sunday.

A man went missing from a Carnival cruise ship in the Gulf of Mexico. What happened next might well be a 'Thanksgiving miracle'

A passenger went missing from a Carnival cruise ship in the Gulf of Mexico. Quick thinking and a 'miracle' saved the man's life.