The homeowner and his family escaped their burning home with only the clothes on their backs.

He says they were all sleeping when smoke detectors went off around 2 a.m. just as thick, black smoke and flames started to creep inside their home on Professor Day Drive.

Their neighbours also ran for safety as a precaution, though it doesn't appear that there was any smoke, fire or water damage done to the adjacent homes.

According to witnesses, fire crews arrived quickly as the fire spread from the garage to the driveway. At least two vehicles were destroyed.

"When crews arrived on scene, there were flames, and the fire totally engulfed the garage area," said Deputy Chief Olaf Lamerz of Bradford West Gwillimbury Fire and Emergency Services.

"This is a perfect example of how with working smoke alarms, it saved these people's lives," Lamerz added. "Had they not had them, there was a high potential and probability that we could have potentially seen fatalities here today." 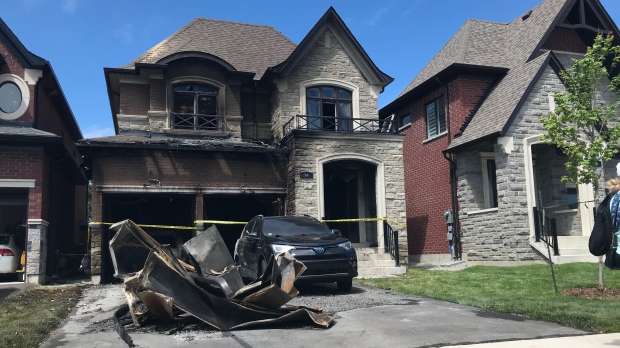 Neighbours said they heard loud explosions coming from the home.

"The whole sky was red," described Jason Angelov. "The entire house was burning. The garage was like popping, and there was smoke and fire everywhere."

His friend Joshua Kalinovsky rushed from his home to record video of the blaze on his phone.

"I didn't want to actually step out from my porch because I thought this car was going to explode because you could feel the heat from the fire."

The homeowner, his wife and two sons escaped unharmed.

He says they lost everything inside.

Neighbours and strangers stopped with offers to help the family as they await word from the insurance company on where they can stay.

Firefighters say the home is a total loss, and the damage is estimated at about $800,000.

The Fire Marshal's office is being called in to investigate how the new home went up in flames.