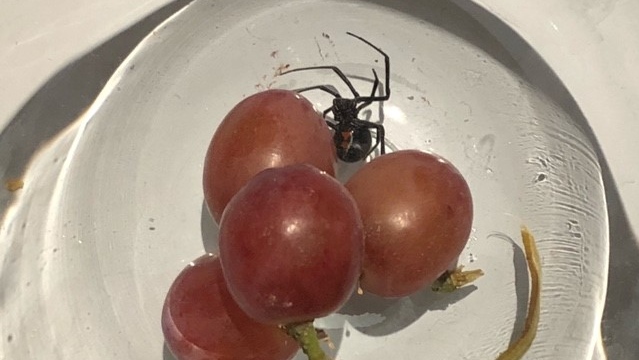 Bracebridge, Ont., family say they found a black widow in their groceries on Tuesday. (Supplied)

BARRIE, ONT. -- An eight-legged intruder made its way into a Bracebridge, Ont., family's kitchen.

According to the family, they made the spooky discovery while preparing a snack after returning home from a routine trip to the grocery store on Tuesday afternoon.

"I heard her let out a spooked scream followed by 'oh, that is a creepy spider' then she came out of the kitchen fairly quickly," said Bill.

Bill said when he heard his daughter scream, he walked into the kitchen and found grapes on the floor and a small bunch in a bowl.

That's where he says he saw a black spider with red markings attached to a grape.

"We both looked up the spider to make sure it was what we thought, and once it registered what it was, we both were a little freaked out," said Bill.

"She didn't mind looking at it once it was in the glass bowl, but she still had a good case of the Heebie-jeebies for a bit," the Bracebridge man said.

Shortly after the discovery, Bill said he called the Bracebridge grocery store and spoke to the manager.

Soon after, he said the family received a refund.

"The Red Seedless Grapes were from Mexico. It hit home to my daughter and I that I need to check the grapes before buying them; you never know what has hitched a ride," said Bill.

As for what the family did with the spider, Bill said they flushed it down the toilet.

"We made sure it went down," said Bill.