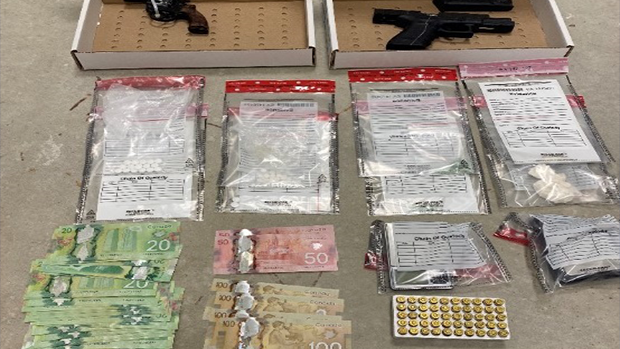 Three adults and one teen face drug and weapons charges following a dispute in Barrie on Tuesday.

Barrie police arrested the four individuals on Penetang Street and said officers found cocaine, oxycodone, hydromorphone, methamphetamine and fentanyl, which they believe was for the purpose of trafficking.

"Removing drugs from the street is one thing, but two firearms and ammunition in addition to the drugs is an indication that there was the potential for real threat to the safety of innocent persons," Barrie Police Services said in a release.

NEW | Conservatives divided on fate of O'Toole, as party's MPs call for unity

Canada must re-engage on diplomacy with China, but also learn lessons, experts say

While the saga regarding the detainment of Canadians Michael Kovrig and Michael Spavor by Chinese authorities may be at an end, the political fallout between the two countries as a result of it remains unclear.

Health officials in Ontario are reporting another 653 cases of COVID-19 Sunday as well as six additional deaths related to the disease.

A team of scientists have developed a 3D-printed vaccine patch as a painless way to immunize without the use of a needle while offering a better immune response, according to the study.

Denied cross-border shoppers, some U.S. companies opt to export to Canada instead

American businesses are at a loss to explain why the U.S. continues to deny Canadians the ability to drive across the border for holidays, day trips or shopping excursions -- a restriction the federal Canadian government began easing over the summer for fully vaccinated U.S. citizens and permanent residents.

Canada's only female defence minister was in 1993. Is it time for another?

Prime Minister Justin Trudeau is being urged by several experts on sexual misconduct in the military to name a new defence minister as he sets about building a new cabinet following Monday's federal election.

Many Canadians remain detained in China; at least four on death row

While the release of the Michael Spavor and Michael Kovrig is reason for celebration, there are many other Canadians still detained in China, with at least four having been sentenced to death.