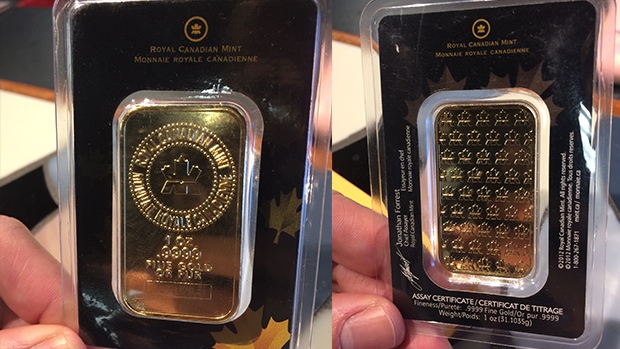 Darren Ceccanese spent $1,200 on what he thought was an authentic gold bar. (Krista Sharpe/CTV Barrie)

A Barrie man has been arrested for allegedly duping someone out of more than a thousand dollars in a fake gold scam.

Darren Ceccanese from Orillia purchased the advertised one ounce gold bar from a seller on a Facebook page for $1,200. The phony bar was actually worth about 25 cents.

The bar appeared to be wrapped and certified by the Royal Canadian Mint.

Ceccanese purchased the bar in December and contacted police after confirming it was a counterfeit.

A 49-year-old Barrie man was identified by investigators on Thursday and arrested. He has been charged with fraud under $5,000.

He appeared in court on Friday.