In an emotionally charged special meeting held on Wednesday evening, Barrie City Council voted to reprimand one of its own. Councillors unanimously voted in support of the city's integrity commissioners' report that found Councillor Keenan Aylwin violated the city's code of conduct for a post he wrote on Facebook back in March.

In the post, Aylwin wrote that two local MPs were "playing footsies with white supremacists." Both MPs, John Brassard and Alex Nuttall, have launched defamation lawsuits against the first-term Barrie councillor. 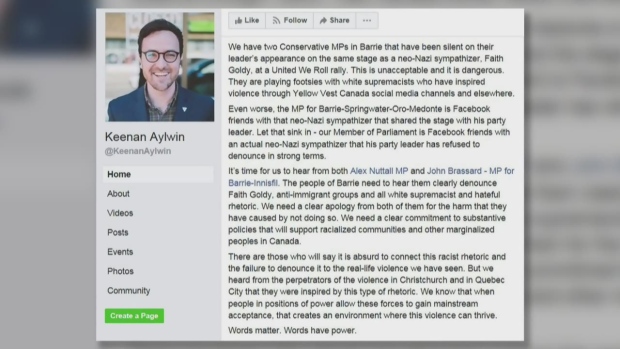 On Wednesday evening several deputations were made at city council, with people speaking out in Aylwin's defence. Another six people tried to make last-minute deputations, but councillors voted against it.

Those who did speak argued the decision on whether or not to reprimand the councillor had become too partisan.

"What I have witnessed over the past couple of weeks is incredible partisan politics, shaming and humiliation of a young person with a passion for change," one woman said. "I've been, frankly, embarrassed by my council," she added.

Mohammed Hashim, a representative of Urban Alliance on Race Relations in Toronto, spoke passionately about the need to condemn racism and hate. He argued that voting in favour of or against the integrity commissioners' report was not the solution. Instead, he suggested both Councillor Aylwin and MP Brassard come together to denounce white supremacy.

"We know there's a deep sense of commitment towards diversity. Let's focus on that," he said.

Councillors repeatedly said how difficult the situation was, but argued the vote was not about racism or white supremacy, but whether or not Aylwin violated the specific code of conduct.

"Let me be clear," said Councillor Natalie Harris, "we are not in favour of political censorship. We are in favour of abiding by our code of conduct."

After the vote took place Councillor Aylwin told CTV News "there's a saying that if you don't get a penalty every now and then, then you're not in the game. So, I have to accept the will of Council, and I will respect that, and I hope we can get back to doing the important work of representing the constituents of Ward 2."