Barrie boy helping Ukrainian refugees one backpack at a time

Barrie boy helping Ukrainian refugees one backpack at a time 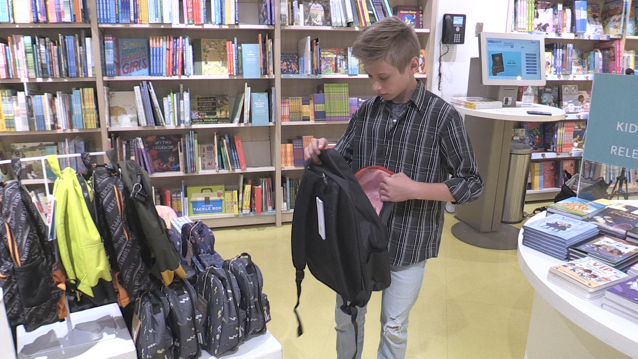 A 12-year-old Barrie boy hopes to make life a little easier for students fleeing the war in Ukraine, one backpack at a time.

When the Russian invasion of Ukraine began earlier this year, Oscar Oliver knew he needed to help.

"I felt really upset, and I felt like I needed to do something," said Oliver.

That's when he launched his "buy a backpack" campaign. He started collecting funds to help the millions of Ukrainians seeking refuge in Poland, his family's native homeland.

"They came back with nothing. All they had was one suitcase, so I thought a backpack would be a good idea because it has school supplies, educational supplies, toys, snacks and games," said Oscar.

Oscar packed and delivered over 440 backpacks to children in refugee centres throughout Poland, calling it a life-changing experience.

"He saw it first hand. He saw the conditions that the children and the families were living in, and he came back, and he had to do more. Those were his words to us when he arrived home," said Garry Oliver, Oscar's father.

Indigo caught wind of Oscar's campaign and decided to help. The company is gifting Oscar $75,000 worth of supplies.

"We were so excited when we heard about what Oscar is doing and all the good he's doing in the world, and we just wanted to help, be a part of it and support him," said Gail Banack, Indigo vice president of kids and baby.

Now, Oscar's goal is to fill 1000 backpacks. He hopes his campaign will inspire others.

"I think the message is for other children, that small things matter. You can make a difference doing something small, and something small can snowball into something big," said Oliver.

Oscar will return to Poland on Aug. 23 to deliver the rest of the backpacks with his father.

"It feels really good that I did something to help impact some people's lives," said Oscar.

Oscar's long-term goal is to continue fundraising to help children in other parts of the world, as well.

As Atlantic Canadians grapple with the aftermath of destruction caused by Hurricane Fiona, CTVNews.ca takes a look at major hurricanes that have wreaked havoc in the country throughout history.

A gunman opened fire in a school in central Russia on Monday, killing 15 people and wounding 24 others before shooting himself dead, authorities said.