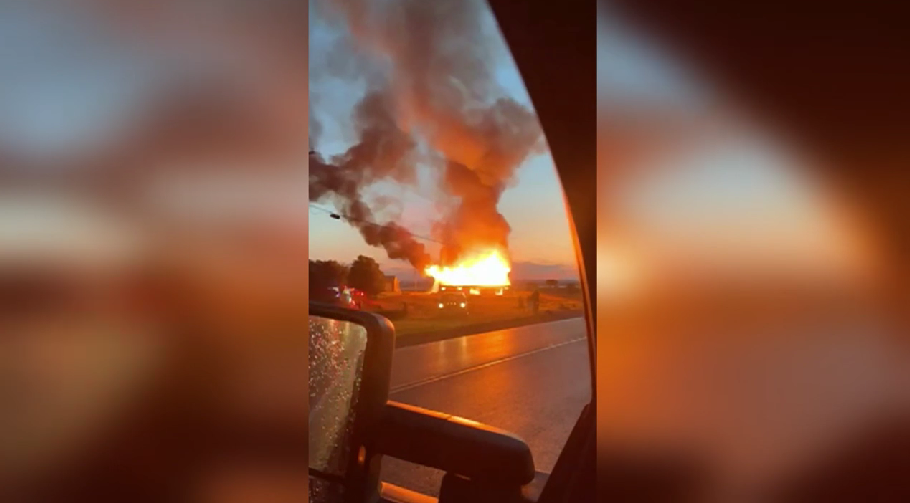 Three different fire departments joined as one after a fire erupted in Clearview Monday evening.

Fire officials were called to County Road 10 near Highway 26 shortly before 8 p.m. for a fire at a large barn.

The fire chief tells CTV News the barn was filled with hay and that there were no injuries and no loss of livestock.

Mutual aid was requested from crews with both the Essa and Springwater Fire Departments.

Police had the roadway in the area blocked off initially as crews worked to get the fire under control.

There's no word as to the cause of the fire. A damage estimate was also not available.

A spokesman for the chair of an all-party parliamentary group says it is "carefully" reviewing how it handles events with outside events after a newspaper publisher accused of holding antisemitic views took part in a recent gathering.

A mass shooting survivor and spokeswoman for gun-control group PolySeSouvient says it is 'incredibly disrespectful' for firearm rights advocates to invoke the group's name in a merchandise sale discount code.

Twitter has suspended rapper Ye after he tweeted a picture of a swastika merged with the Star of David.

U.S. prosecutors on Thursday asked a judge to dismiss bank fraud and other charges against Meng Wanzhou, the chief financial officer of China's Huawei Technologies whose 2018 arrest strained relations between the U.S. and China.

The deaths of four University of Idaho students nearly three weeks ago have riled up thousands of would-be armchair sleuths, many of whom are posting speculation and unfounded rumors about the fatal stabbings online.

After 300 hours of testimony, 9,000 exhibits and a few major revelations, the public portion of an investigation into the first-ever use of the Emergencies Act ended Friday with a deep dive into questions about government accountability and transparency.

Hockey Canada says there were more than 900 documented or alleged incidents of on-ice discrimination -- verbal taunts, insults and intimidation -- across all levels and age groups during the 2021-22 season.