It's a waiting game in Angus as people wait in limbo for word about their homes.

More than 48 hours after the tornado swept through an Angus neighbourhood, the first phase of the recovery was completed, but residents are still waiting to learn the fate of their homes.

The roads have been cleared of debris and residents along Banting Crescent in Angus were anxious to get back into their homes, if only to gather a few things.

But every house on the north side of the street has been declared unsafe. Linda McClelland registered with the town to get back into her home.

“We just filled out a form that told them what we needed to get out of the house. I guess they just put it in priority like medications, belongings, personal belongings,” she says. “We have a car in the garage that we need to get so we ca get to work.”

Fortunately the car was undamaged.

One-by-one, residents were escorted into their homes by a firefighter and building inspectors.

Michell Gerdis was more concerned about her cat than the house; 15-year-old Max disappeared when part of the roof was torn off by the tornado.

“He survived, he's ok,” Gerdis says. “We just got him out now. He is healthy, he is moving, we are just going to take him to the vet now and make sure he is all OK. It's just a house. You can replace that.”

As of this afternoon, all of the affected residents have had a chance to gather some essentials from their homes. But before anything else happens here each house must be assessed individually to make sure it's safe for workers to go in.

Samantha Boshane it could be a complex process to get back in to her home.

“They say that until an engineer inspects the property we are not allowed back in,” she says. “So we have to get an engineer through the insurance company to come out with the adjuster.”

The Insurance Bureau of Canada has investigators in Angus to help address any concerns residents might have. One of those investigators, Peter Karageorgos, says patience is needed.

Insurance companies have plenty of experience dealing with disasters like this.

“We have had tornados strike Goderich, Midland, and Leamington in the last few years and we are seeing much more events like this unfortunately,” he says. “This has become the new normal.” 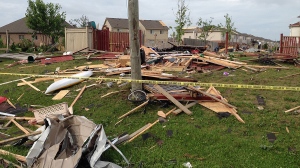 Widespread Damage After Angus Tornado: A look at damage done after an EF-2 tornado touched down