$6.2 million makeover for Trap and Skeet Club in Cookstown

A $6.2 million makeover for the Toronto International Trap & Skeet Club in Cookstown for the 2015 Pan Am Games will make it one of the most advanced shooting facilities in Canada.

“The building is an indoor shooting range for the Pan Am venue and it is a wood and post and beam construction,” said senior project manager Ray Polidoro.

The harsh winter has been the biggest challenge for construction crews.

“There is so much work that you cannot really use gloves with and using drills and saws or hand tools that the guys needed – you cannot work in the -20C, -30C weather components,” added Polidoro.

All Pan Am shooting events will be held at the club. The building has been tested extensively to make sure it’s safe. Four-ply walls are designed to stop any stray bullets.

Another safety feature is the overhead baffles that will be installed over top of the range. The big sections of steel and plywood will run in between giant posts so no bullets can leave the course.

“It’s important that the athlete cannot see any blue sky from any of the 40 firing points. And by so doing it means no bullet can actually escape from the course,” says Toronto 2015 senior project manager Sarah Martin.

The upper level of the building is an indoor air rifle range, one of the most advanced in the country.

“To have a facility such as this that allows four season training for shooting Canadian athletes. We are looking at growing the next generation of high performance at this facility, both for the games and legacy mode,” adds Martin.

The trap facilities have also been given a facelift. The clay pigeons will be shot from remodelled bunkers.

Construction is scheduled to finish by the end of May, ahead of the 250 athletes arriving for the games.

The Pan Am shooting events that take place at the Toronto International Trap & Skeet Club are also Olympic qualifiers. Many of the athletes competing this summer are hoping to earn a spot on their national teams and make it to RIO in 2016. 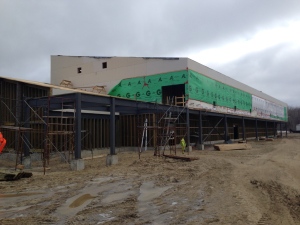