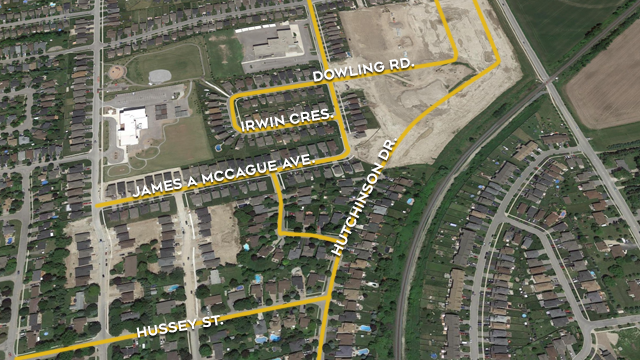 Nottawasaga OPP are asking anyone with home security footage in the following neighbourhood to contact them regarding a crime spree that saw 41 vehicles damaged between Sat., Aug 21, to Sun., Aug 22, 2021. (CTV)
Barrie, Ont. -

The Nottawasaga OPP is looking for witnesses or security footage to help police solve a crime spree where 41 vehicles were reported damaged in Alliston.

Police are asking residents to check their security footage in the Alliston neighbourhood area of :

Anyone with any information is urged to call police or Crime Stoppers.

On the day Saskatchewan asked the federal government for help to deal with surging COVID-19 hospitalizations, Premier Scott Moe granted the province could have acted sooner on a renewed mask mandate or proof-of-vaccination policy.

A gang that kidnapped 17 members of a U.S.-based missionary group, including one Canadian, is demanding US$1 million ransom per person, although authorities are not clear whether that includes the five children being held, a top Haitian official told The Associated Press on Tuesday.

A Metro Vancouver woman is looking for answers following the untimely death of her dog aboard a flight last summer.

A group of quick-thinking young men were forced to get creative by using their turbans as a makeshift rope to help rescue a pair of hikers in a Metro Vancouver park earlier this month.

'I'm heartbroken by this': Celine Dion delays opening of Las Vegas shows due to medical reasons

Just weeks before Céline Dion was set to return to the stage in Las Vegas, the Quebec superstar is delaying her show due to "unforeseen medical symptoms," her team said in a news release.

'We have made the impossible possible': Calgary, Edmonton celebrate mayoral firsts

Alberta's two major cities are set to make history in their mayoral races after Monday's municipal elections across the province.

Having mono in adolescence may increase MS risk later in life: study

Having infectious mononucleosis, also known as mono, during childhood and adolescence may be a risk factor for developing multiple sclerosis later in life, a new study suggests.